MLS Arrives in the Magic City

Learn More About the Firm of Hochman & GoldinClient Spotlight: The Jills 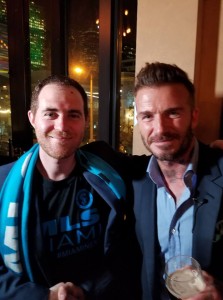 The day has finally arrived, ladies and gentlemen! After four years of blood, sweat, tears, and feverishly passionate enthusiasm, Major League Soccer (MLS) is finally making its triumphant debut in the Magic City! Earlier this week, the Knight Concert Hall was full of fútbol fanatics ready to celebrate the huge news with none other than major soccer star David Beckham!

Several big names were also in attendance during the announcement to celebrate MLS in Miami. The CEO of Sprint Marcelo Claure and even the man behind the former cultural juggernaut American Idol Simon Fuller participated in the welcoming festivities. Our own Brian Corey (a diehard soccer fan) was among the fans and he even managed to snap a picture with the man of the hour David Beckham himself! Also expressing their support through messages were legendary Olympic gold medalist Usain Bolt, rapper Jay-Z, New England Patriots quarterback Tom Brady, and actress Jennifer Lopez.

There is still a lot of work to be done before MLS is fully up and running in Miami but with such a loyal fanbase and strong support, it’s only a matter of time before we’ll be cheering on our favorite MLS team!